The Tableau and Proverbial Wallets – Technology for Grampa and the Grandchildren 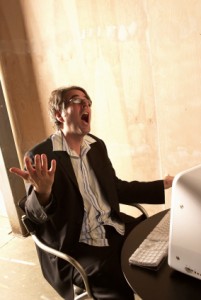 When it comes to technology, the limits (and the frustrations) appear to lie only within the confines of non-technical minds. But thanks to the likes of John Kestner, a graduate of the MIT Media Lab, we have a vision of how technology might mix with the physical to truly revolutionize the world.

Snail mail is so past tense today, what with the power and immediacy of email. And photos, remember when they had to go to a developer and you had to wait to get a sense of just what you had been able to capture. Actually, if you are young enough you may not remember that at all.

So imagine a world where technology still rules but for Grampa, tech skills could be removed from the equation. I use Grampa as my example with all kindness and my representative example for all those out there who remain frustrated because they simply cannot find enough time to keep up with the ever-changing technological world.

Imagine, if you would, the Tableau, a typical little night stand next to your bed, one with a single drawer that could be slid open to see what is inside. We are talking about the same type of physical drawer that one opens to find a pair of socks or some clean underwear.

But instead of a drawer, suppose it is a physical inbox. Imagine that Grampa’s children have some great photos of the grandchildren building a snowman during the first winter snowfall. They no doubt want to send them along to Gramps and would likely download them from their camera, attach them to an email, and then send them along. Now suppose instead of Grampa having to sit at some computer to log on and check his email (he thinks that logging on to a computer and accessing an email account is as enjoyable as shaving is to a 20-year-old male), he could get those photos in the traditional format.

Suppose instead that little desk dresser drawer could work like a physical mail chute, that instead of those emailed photos arriving in the inbox of some computer account they were converted to traditional paper photos without the slightest input from Gramps. Then add to that one last little fine touch, that all Gramps has to do is open the drawer of that little nightstand and lo and behold, what he would find there the very items he was so used to seeing: those little 4×6 sheets of fully developed photos, prints that he could simply lift from his drawer and handle as he had done as a younger man.

Taking that one step further, imagine Gramps sitting down at a table to pen a thank you note on paper. But instead of searching out an envelope and finding the requisite snail mail address or sitting down at that damn computer, he could simply drop his paper version in his little drawer and physically close it. His work done, technology would take over to ensure it made it digitally to the appropriate person.

But when it comes to the likes of John Kestner, well the sheer genius lies in the ability to fuse the digital with the physical in a way that transcends generations as well. Grampa of course has his finances in order – he is never over-extended or over-drawn because he pays for everything with cash, and when there is no cash to be found in his wallet, well he simply goes without.

But his grandchildren, such is not the case. Raised in a credit and debit card world, his flesh and blood consistently make decisions about finances that are essentially removed from the consequences.

The wallet is almost always empty except for the plastic – the bank accounts are sometimes flush and other times nothing short of destitute. The removal of the physical connection, the one that rules Grampa’s finances, often causes major issues.

Kestner introduces us to another concept, the Proverbial Wallet, a bit like the conversion of the cell phone to the smart phone but again with just a bit more of a physical twist. The goal is to help the young un-abstract virtual assets by providing tactile feedback that even Grampa could relate to.

One such option would be the Bumblebee – the wallet that buzzes via a vibrating motor whenever the bank processes a transaction. When the buzz occurs, it reminds you of the purchase you made but have forgotten about, of that automatic withdrawal to pay for your wireless access or even inform you as to when your partner has charged something to your account. For those who need real tactile reinforcement, we could take this a step further, build in an electronic stinger that provides a nice little zap whenever you are overdrawn or have failed to make a payment on time.

Or another Kestner wallet choice would be the Mother Bear, a folding leather contraption that protects your money when you need to be thrifty. It is equipped with an adjustable hinge that resists opening, greater resistance when your account is hitting bottom, less resistance when you are flush with cash. It could even include a bit of adjustable card stickiness making it substantially more difficult to pull the credit card out as you approached your credit limit.

But perhaps the most inviting in our visual world would be the Peacock, a wallet that swells and shrinks to reflect account balances. This would be my choice though I would want to add a little plumage and color when swollen. That way my assets could be pulled at just the right moment to attract members of the opposite sex.

These ideas sound wild, like the ones we saw when we read the great work of Arthur C. Clarke or Isaac Asimov novel. But they represent the place where technology could truly improve on the quality of life for those without a technical bent.

As Gramps always says about that new phone we gave him last year.

“If I can’t make it work, then the damn thing ain’t all that smart.”